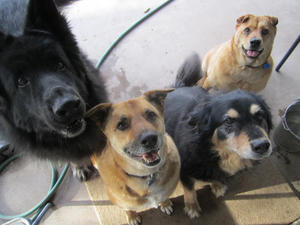 Humans have maintained a population of useful animals around their places of habitat since ancient times. Dog breeding is the practice of mating two different dogs with the purpose of producing an offspring with specific characteristics and qualities. Some dogs might have specific inheritable characteristics that can develop into a disease or a disability, in which case offspring may not be healthy since many breeders are more concerned with profit making than the animal’s welfare (this is particularly a risk when dealing with puppy mills rather than reputable breeders). Choosing between purebred and mixed breed should be the first decision you make when looking for a puppy. There are multiple codes that determine each of their traits, from their colors, shape of their tails, to the sound of their barks and their reaction to strangers. These sets of traits lead to classifications into groups called breeds.

This refers to a dog of a modern dog breed with documented information in the stud book that has records of all the dogs that have been bred in a specific area and registered with a breed club. Purebred dogs have been bred for certain qualities. By researching a breed or seeking assistance from breed clubs, you might get the exact ideas of what the temperament of a breed will be. If one also wants specific needs that will come with the dog like good hunting skills or watchdog tendencies, a purebred dog would be easier to foretell and train. Size is a good consideration to people, so a good breeder should also be able to tell the size that a puppy will eventually reach. Through pure breeding, the puppies have a chance of living a good and a healthy life through the control of selected mates. Purebred dogs cost significantly more than mixed breeds, and for that reason theft is sometimes an issue. Paperwork is generally included when purchasing a purebred dog.

A mixed-breed dog is a domesticated animal made from multiple breeds of the same species (in this case between two dogs) often breeding without the interference from human or selective breeding and usually whose ancestry isn’t known. They are not associated with generational lineage where each breed is fine-tuned into performing specific tasks in society. Mixed-bred puppies can be adopted at a very low cost. They aren’t expensive to own as compared to the pure breed because not so much expertise is involved in their making. Size, traits, and temperament are far less predictable as compared to pure breed; the owner will be more likely to see unexpected traits. These dogs can possess unusual and wonderful traits that are an attraction to people.

There has been longstanding argument s amongst dog lovers and experts about mixed breed versus pure breed. Both have distinct advantages and disadvantages, but how your puppy will turn out entirely depends on the way it is raised and trained. Finally, if you are looking for a companion, it doesn’t matter the breed–all are wonderful creations and can enrich our lives greatly.