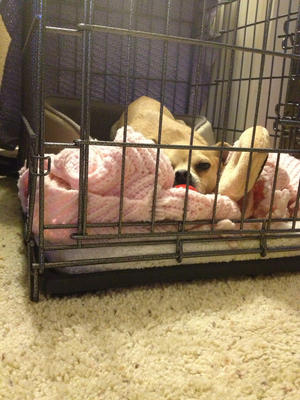 Using crate training for your dog takes effort and time but is very useful in a number of scenarios. If the puppy or dog is new, using a crate limits the pet to the rest of the house until all the house rules have been learned, such as what he can or cannot chew. A crate is also a secure and safe way of traveling with the puppy in your car and a way of transporting the dog in areas that dog movement is restricted. Properly training a dog to use a crate makes him know it is the safest place for him and will result in your dog being ready and content to spend time in it when needed.
Crate Selection
In most cases, the crates are plastic or collapsible types of metal pens. Most dog supply stores offer these crates in different sizes. The best crate for your dog should be large enough for the dog to turn around and stand up.
As you learn how to use crate training for your dog, know that it can take weeks or a few days, depending on the age of the puppy or dog, past experiences, and temperament. While using crate training for the dog, training must be done in a number of steps without doing it too fast, and the crate must be associated with an item or treat the dog finds pleasant.

Introducing Your Puppy/Dog to the Crate
The crate should be put in the part of the house where there are people or the family spends lots of its time, such as the living room. Put a soft towel or blanket in the crate and take the dog to the crate while talking in a happy voice or tone. The crate door should be securely fastened to avoid frightening or hitting the dog.
You can encourage your pet to enter the crate by dropping some crumbs of food treats nearer to it and slightly beyond the door and throughout the crate. At first, the dog might refuse to go inside all the way; do not force him. You can toss treats continually inside the crate until the pet has learned to calmly walk inside the crate to eat the food. For dogs uninterested in food treats, a favorite play thing or toy can be tossed inside the crate. For some dog owners, this step can take a couple of days or just a few minutes.
Feeding the Dog in the Crate
Once you have introduced the dog to his crate, start feeding him every meal near the crate. It helps him develop a pleasant association with the crate. In case the dog has already started entering it, the dish containing his meal should be put all the way towards the end of the crate. For a dog that is still uncomfortable with entering the crate, put the food dish as far as the dog is ready to go inside the crate without making him anxious or fearful. Every time he is fed, the dish should be moved a little further inside.
Once the dog has learned to eat inside the crate comfortably while standing, close the crate until he is through with eating. Open the crate door at first after he has completed his meal. After every successful feeding, the door can be left closed for a couple of minutes more until the dog stays inside the crate for about ten minutes after taking his meal. If he starts whining, probably you have increased his time in the crate more than he is accustomed to and you should shorten his time inside the crate next time. However, if the dog cries or whines inside the crate, he should not be let out until he has stopped. Otherwise, you will teach him that to leave the crate he must cry or whine, and he will be doing it everyday. Always reinforce desired behavior, not undesired behavior.
Crating the Dog at Night
To crate the dog at night, put him in the crate using the normal treat and regular command. At first, you can have the crate in a hallway nearby or in the bedroom, especially if it is a puppy. Most puppies have to eliminate outside at night and they usually whine when they want to be let outside. For an older dog, the crate should also be put nearby to avoid associating it with social seclusion. As the dog learns to sleep comfortably all night with the crate near the bedroom, gradually move it to the place of your own liking.

By following the guidelines in this article, you and your dog can reap the benefits of crate training that have produced happy results for many others before you.