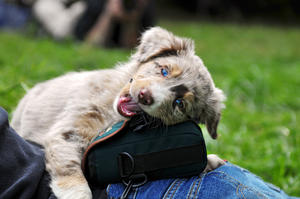 Dogs are vital animals, at the head of the list as pets in most parts of the world. There are various classifications of dogs across the world, among them the sporting dogs, the non-sporting dogs, the working dogs, and the hound breed dogs. Common domesticated species of dogs in society include German Shepherds, Chihuahuas, British Bull dogs, Akitas, American Eskimo dogs, and many others. Human beings have partnered with dogs for various reasons. For instance, in traditional society, the partnership with dogs has aided with herding and hunting, service to the blind and disabled, and security against intruders. However, most people who are domesticating dogs in current society do it for companion purposes, that is, as pets. For whichever reasons a person ought to domesticate a dog, it remains a primary need that they must learn their behaviors, and most importantly how to communicate with them.
On an attempt to ensure a mutual relationship and understanding between humans and the dogs they domesticate, there are a number of training lessons to be included. For example, there are a number of steps that dog trainers use in order to prevent dogs from chewing. Inappropriate chewing is often a problem among puppies as they use their teeth to explore their surroundings. In as much as chewing is a usual characteristic in young dogs, it is as well true that the practice is undesirable, especially when channeled to valuable objects such as furniture, shoes, or human body parts like the hands and feet. Failure to timely control this practice consequently leads to extreme destruction of property, development of bad attitude towards the pet, and at times even medical problems.
There are a number of procedures that one should take in order to control bad chewing habits among one’s dogs. The first step is providing proper medication to the dog, which must adhere to the guidelines of the animal’s veterinary. The medications should be accompanied by good feeding, as nutritional deficiencies brought about by intestinal parasitism often results in pica, which is usually mistaken as inappropriate chewing. Furthermore, the situation may lead to nausea, and this triggers chewing as a coping mechanism.

Secondly, one should conduct a thorough dog proofing around his or her home. Despite how much you trust your dog around your home, dogs will just be dogs, and they love exploring the world using their mouth. As such, one must take control of their possessions at home, and the most appropriate way to do dog proofing is by keeping important things that you do not want to be chewed out of reach. However, there are some factors that you need to consider when moving the possessions, for instance how high your dog can jump. Mostly, dogs like chewing objects like shoes, garbage, and clothes, among other things. It is important to keep food far away from the dog’s reach.

Thirdly, as a pet owner inappropriate dog chewing can be prevented by avoiding confusing your dog. As such, it means that when you are out playing with your dog, never give objects like shoes, clothes, socks, or books to your dog. It is unfair and unrealistic for you to expect your dog to differentiate between when it is okay to chew on a shoe during playtime and when it is not okay at other times.

Fourthly, to avoid this inappropriate habit, the dog should be given other alternatives for chewing that are relatively tasty. By doing this your dog will eventually leave your personal things alone. If your dogs have fewer alternatives to chew on like toys, then don’t blame them when they end up with your possessions. Remember, dogs need to chew, especially puppies and dogs less than three years old, so make sure they have adequate chew toys to play around with when at home.

Finally, proper supervision of the pet must be carried out to ensure this inappropriate habit is stopped. It is always more productive to provide a correction the moment an infraction occurs, rather than after the fact. After finding an inappropriately chewed object when you come home at the end of the day after work is not the best time to correct. Many dog owners have benefited from the use of crate training, as long as the dog is not confined for too long of a period. By teaching your dog the proper boundaries, your expectations will be made known and both you and your dog will be happier.